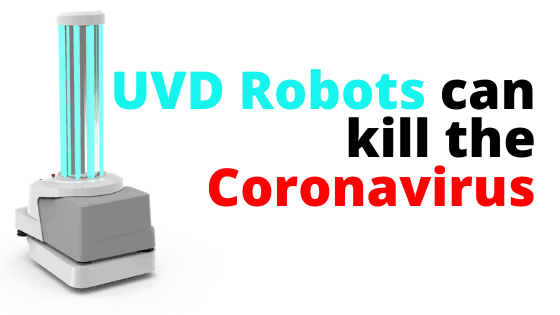 Coronavirus isn’t stopping anytime soon. And to stop it from spreading further, governments, doctors, and the public are doing everything they could. Yet, the novel thing has claimed over 1,000 deaths and infected tens of thousands of people as of now. But, a Danish company has made a robot that can kill the virus around it by emitting UV light.

Eradicating, or at least stopping the novel Coronavirus has turned the major aim of all the nations now. Ever since WHO proposed it as an emergency, nations are considering it seriously and have tried everything to stop it from spreading further. This infection, primarily caused by consuming bats, has impacted thousands of lives and even halted traveling and major programs.

While this being serious havoc, a Danish company has proposed a partial solution to stop the virus from further spreading. UVD Robots, which has won the Innovation and Entrepreneurship Award in Robotics and Automation last year, is now a part of Blue Ocean Robotics. The firm’s product, a UVD Robot is capable of emitting UVD rays around that could stop the virus spreading. This is helpful in hospitals as it optimizes the workflow.

The machine is autonomous and travels throughout spaces emitting UVD light. It’s battery-powered and takes 3 hours to get fully juiced up. And this could make it work for 2-2.5 hours running through 9-10 rooms emitting light. It’s capable of emitting light 360° and works over Wi-Fi. Aside from technical specifications, it claims to kill 99.99% bacteria and is verified by several hospitals and institutes in Denmark.

The company says that China showed interest in procuring these robots, but they’re facing travel restrictions in exporting them. If sent, this could help reduce the Hospital-acquired infections (HAI) which posts significant risk if not controlled. Letting this UVD Robot navigate autonomously throughout the hospital by emitting light wherever required, can help control the spread.