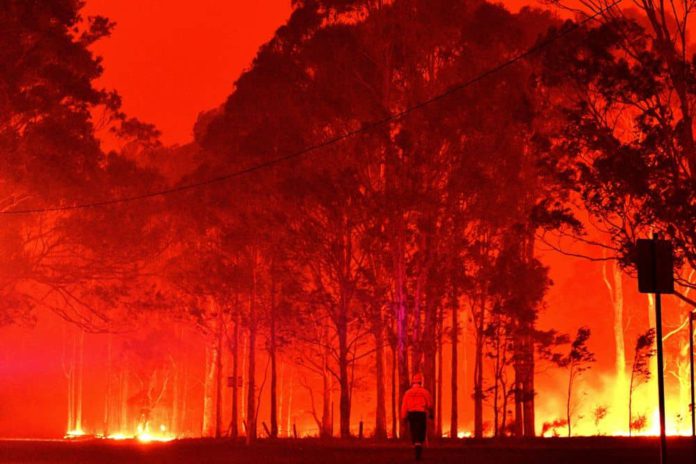 Australian Bushfires are marked as one of the worst wildfires in the world’s history. The catastrophe burned over 15 million acres and killed more than a billion animals. And researchers now say that these kinds of wildfires will be common in future due to climate changes.

While the entire continent is being affected, New South Wales took the biggest hit, with constant fired raging since months. Guardian reported that Melbourne recorded the worst air quality of the world, as fires are still burning across Victoria. Even in Sydney, the air quality index was recorded worst as 11 times the hazardous level! Satellite pictures show the continent turning red and passing its smokey clouds onto other nations.

If you’re wondering what caused these fires, Australia is regular in facing such fire season every year and is vulnerable to lightning strikes that may cause a fire. This is one reason that struck Victoria, but NSW police have caught several people claiming them to be responsible for starting these fires. Whatever happened, the result is now devastating. Though millions are being poured into saving creatures, it isn’t that effective as ongoing calamity.

New reports from Richard Betts, who presented his aggregated review from 57 peers studies, says that climate change will increase the frequency and severity of weather conditions that cause wildfires. The world is currently lined towards a 3°C warming, which makes it normal for everyone in future to witness such wildfires as common.

Betts, in his explanation of 2°C modelling global warming, says that McArthur Forest Fire Danger Index concludes Southern Australia could face an extra 20-30 days of severe temperatures every year. Though the recent trends of burned areas have dropped due to clearing of forests for agriculture, it isn’t so significant to stop the upcoming climate changes which can push the world hard to have deep temperatures, thus wildfires again.