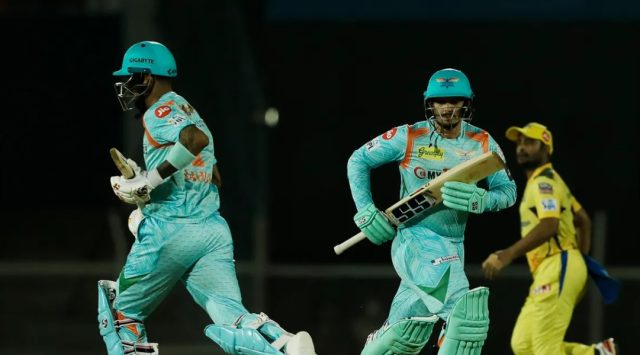 And what a thriller it was! The Match 7th of IPL 2022 – CSK vs LSG turned out to be pure rampant from both sides. Just as we said, both the teams leveraged Brabourne’s short boundaries to score big, resulting in over 400+ runs flowing in today, overall. Here’s how it went in detail;

Winning the toss and opting to bowl, Lucknow found an early wicket in the form of run out (Ruturaj Gaikwad) but didn’t have a good time since then. The just joined Moeen Ali scored quick boundaries along with Robin Uthappa, which was later continued by Rayudu and Shivam Dube. At last, a few quick shots from Dhoni and Jadeja helped CSK to put up a mammoth target of 211 onboard for LSG.

Though it’s big, LSG didn’t fear at any point! With the likes of skipper KL Rahul, Quinton de Kock, and Evin Lewis, they had maintained a consistent run rate close to the required rate. Publishing all CSK bowlers equally, Evin Lewis in association with Deepak Hooda and Ayush Badoni chased down the huge target with three more balls left.

While everyone except Dwaine Pretorius has economy rates over 8, LSG’s Ravi Bishnoi bowled really well from his side. For his wonderful innings at the end, Evin Lewis from LSG was given the man of the match. Also, Dwayne Bravo with his wicket of Deepak Hooda has surpassed Malinga to be the highest wicket-taker in IPL history.