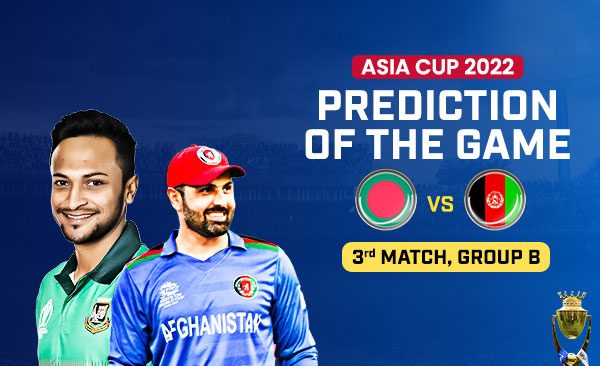 After a thumping win over Sri Lanka in their first match, Afghanistan is now set to take on Bangladesh in the Asia Cup 2022, held at Sharjah Cricket, 6 PM local time onwards.

Bangladesh has been in the turmoil of losing the Zimbabwe series and inconsistencies in captaincy. Though the latter was sorted out by appointing Shakib Al Hasan as the captain – for T20s until the end of the T20 World Cup later this year, the squad is still plagued by injured players.

They miss Liton Das and Nurul Hasan, the two batsmen who showed their form consistency in T20 recently. But with the return of Mohammad Saifuddin, Sabbir Rahman and Mohammad Naim should help the team get back on track. Plus, highly experienced players like Mushfiqur Rahim and Shakib should bring back Bangladesh’s lost glory with tonight’s match.

Afghanistan, on the other hand, has been plentiful with accurate performances in the T20s. They gradually rose to be one of the best T20 teams in a very short span, and a win against Sri Lanka last week had just boosted their confidence. Thus, they have had minimal reasons to change the squad, considering they’re no injuries reported yet. Here’s how they could be;

Setting Shakib Al Hasan or Rahmanullah Gurbaz as captain and Rashid Khan or Fazalhaq Farooqi as VC is recommended. You can also try Mustafizur Rahman or Mohammad Nabi too as VC. With tonight’s match, Shakib will become the third Bangladesh cricketer to play 100 T20Is, after Mahmudullah and Mushfiqur.

In a head-to-head count in T20s, Afghanistan lead by 5-3 over Bangladesh, although it clashes as 1-1 in the last bilateral series.