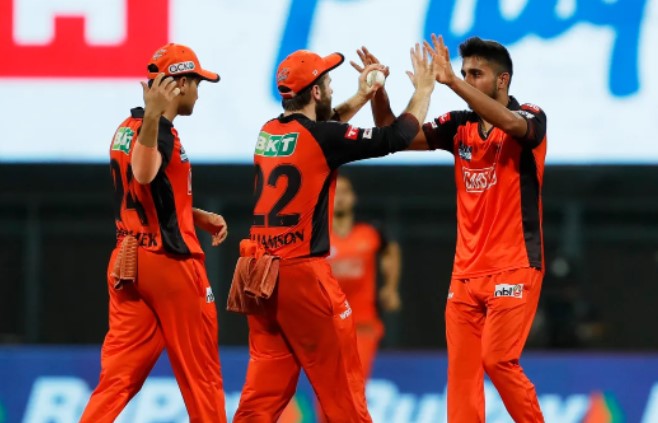 In what’s termed as a deciding match for SRH, the Hyderabad team won over Mumbai Indians with a slight margin to keep their playoff hopes alive. The thumping batting from Rahul Tripathi, Nicholas Pooran, Priyam Garg, and Tim David are the highlights of tonight. Here’s how it went;

Winning the toss and opting to bowl first, Mumbai Indians stuck Abhishek Sharma down within the powerplay. But SRH’s top order changes resulted in great condition, as Priyam Garg and Rahul Tripathi ran through MI bowlers until the 10th over. Together, they have added 78 runs in 43 balls. Although Garg fell short of a well-deserved half-century, Tripathi continued his bashing innings with Nicholas Pooran, adding another 76 runs on 7 overs.

Though they seemed to surpass a 200+ score easily, MI bowlers restricted the SRH middle order with tight bowling, and eventually brought down the run rate, closing them down at 193 runs in designated overs.

With such a huge target, Mumbai Indians made a desirable start adding 95 runs in 11 overs. Both their openers have been good today, although they missed their respective half-centuries. After the fall, SRH bowlers tackled the entire middle order, except for Tim David and Ramandeep Singh, who smashed some quick maxims that thinned the losing margin anyway.

Though SRH won the match, there’s no change in its position, nor of MI’s. While MI lost its chance to playoffs a long time ago, SRH still maintains a thin hope – relying much on the results of other matches this week.