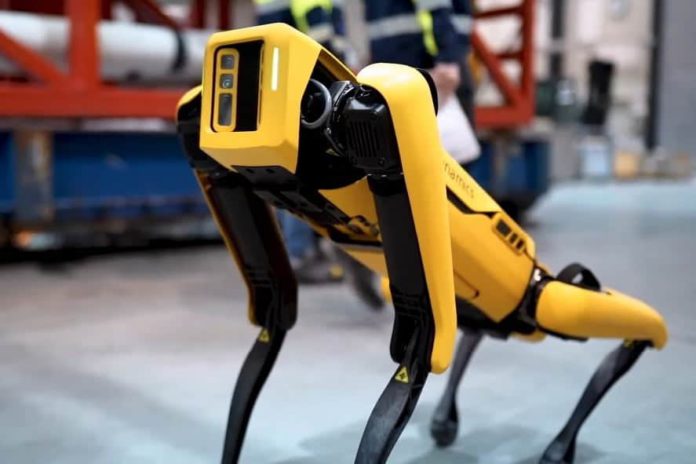 After 28 years of establishment and core R&D works, the reputed robotics company, Boston Dynamics is finally selling one of its robots online for any commercial uses. It set-up a website and allows anyone to purchase a Spot, the four-legged dog-like robot that’s so clever to tackle things in its path, for a price of $74,500! That’s equal to Tesla’s Model S!

Boston Dynamics has long been creating robots that directed towards industry help, thus saving man from regular labour work that doesn’t need much intelligence. Creation of such is Spot, a robotic dog that doesn’t have a proper face and a tail, but does all locomotive movements a man does from taking little jumps to running and crawling, and except climbing!

While it’s true that Spot is the world’s advanced mobile robot, it’s still limited to surveying and regular mapping. It doesn’t carry industrial payloads nor involves in regular factory production, but simple yet important jobs like timely scans of environment or collecting samples or surveillance. The maker has initially supplied Spot (about only 150 till date) for industrial purposes, and now, it’s letting anyone purchase in the US.

Boston Dynamics has set-up a dedicated website for selling this for a whopping $74,500! While that may wonder you, remember you’re getting the world’s intelligent mobile robot. Talking more about its capabilities, Spot was described as a multi-purpose mobility platform with tweaks can be made by adding sensors or programs to make it relevantly useful.

Spot was previously used for finding defects in off-shore oil rigs, creating 3D maps of construction sites, triage of COVID-19 patients and even assisting in police bomb squads! While all these seemed good, people also assumed the dark side of it, like one falling into wrong hands. Boston Dynamics assured that it tries its best to stop that from happening.

Anyone who’s using the Spot should be strictly using the bot for safer purposes as defined. Anything harmful like causing harm or intimating people would lead to disabling the license. The seller also limits the purchase to two robots per person, and if wanted more, should be talking to the sales team directly, explaining why? So, you’re in too?