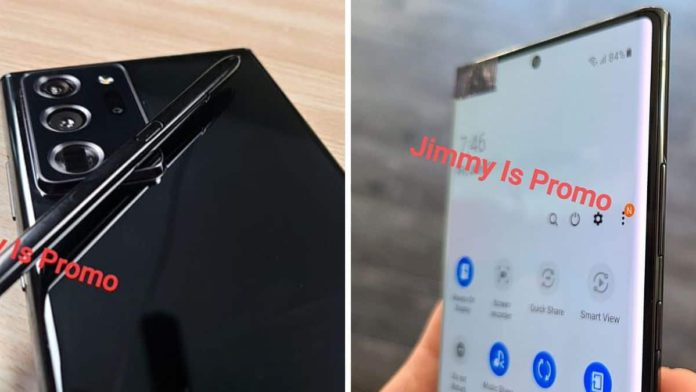 Leaks before the official launch are always exciting. And if they’re coming from trusted sources, the hype within rises even more. Here’s one such YouTuber leaked an image of the Samsung Galaxy Note 20 Ultra, which is found to having a glossy back, center-aligned pinhole front camera, and a periscope styled rear lens. The leaked image also has the S Pen, a stylus for Note handsets.

Jimmy Is Promo have previously leaked similar news from many handsets, and now, on Samsung’s upcoming flagship, Galaxy Note 20 Ultra. Images leaked by him show the front side, where the display is having a centre aligned pinhole front camera. Further, the rear images show a rectangular set-up for cameras, which are styled periscopic and the panel with glossy black finishing. Further, there’s an S Pen to lying on the handset.

Other previous leaks show the Galaxy Note 20 Ultra claiming to run on One UI 2.5 based on Android 10. Other than this, it’s also touted to have an LTPO OLED display with QHD+ resolution and 120Hz refresh rate. It’s also tipped to have a new camera function, space Zoom, and runs on Snapdragon’s latest 865+ SoC.

These leaks came after the Samsung has accidentally leaked renders of the Galaxy Note 20 Ultra on its website, and of course, removed immediately. The company is yet to give an official date of the announcement, but the community thinks it to be somewhere in August. The super cool flagship, Galaxy Note 20 Ultra is expected to launch alongside the vanilla Galaxy Note 20 and Galaxy Note 20+. Further, the typical handsets, Galaxy Fold 2 and 5G supported Galaxy Z flip too are expected alongside.