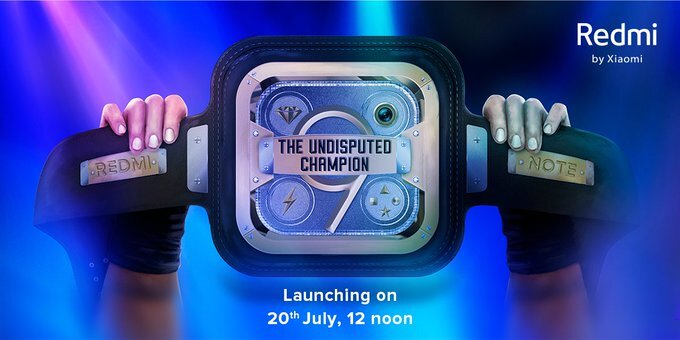 After teasing the product for a while, Redmi has finally given a date for launching the Redmi Note 9 in India. In a tweet posted today, Redmi India has given a date of July 20th at 12 noon. While there’s no specific mention of the event as Redmi Note 9, hints on the poster tell everything. Thus, stay tuned.

Though India is raging against China over border tensions, it’s still can’t be detached from China in terms of a technological relationship. The Indian government has banned 59 Chinese apps including TikTok citing security last week, but it’s still not able to get over with hardware. Redmi phones, though branded as Chinese, are still made in India as claimed by Manu Kumar Jain, India’s Redmi CEO.

And now, the Indian wing is set to bring a new handset to the local community – Redmi Note 9. This was globally launched on April 30th this year, and now officially coming to the Indian subcontinent. The poster in a tweet, as posted by Redmi India, shows the hands holding the winning belt of a champion. This has the number 9 written behind the Undisputed Champion tag, and also the words Redmi and Note on both straps. Thus, it’s official.

It’s scheduled to come on July 12th 2020, at 12 noon. Redmi has also given a link to the dedicated website for it to, probably for the online event where you can live stream. You can register with your e-mail address to receive a notification for the event. To say, Redmi Note 9 Pro has already launched in India and is under flash sale every week. Now, a slightly stripped variant of this is coming.

Talking about the specifications, Redmi Note 9 has a 6.53″ FHD display with 450 nits of peak brightness. With a punch-hole display design, it has MediaTek’s Helio G85 SoC and runs on MIUI 11 based on Android 10. It’s available in 3GB/4GB RAM variants and has quad-rear cameras with 48MP as the primary sensor. Finally, it’s got a massive 5020mAh battery with 18W fast charging and is priced at just $149 for the base variant.