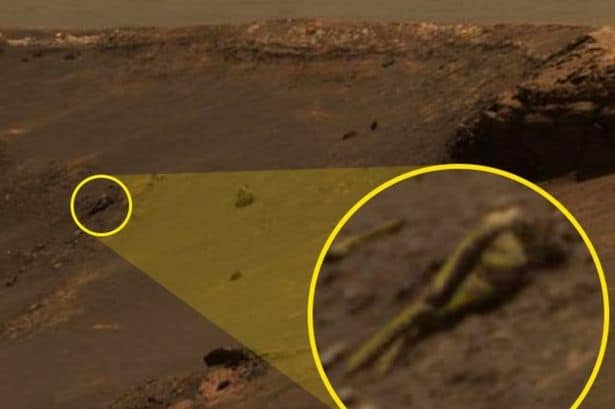 The Red Planet has long been an exciting target for us. With more and more findings every day, expectations on Mars are increasing. The latest photo taken by NASA rover has a dark object found on one of the Mars craters, that seemed like a corpse or statue, that led many to conspire of definite life once.

Interesting findings without proper sources often leads to conspiracy theories. One such incident is the latest picture taken by NASA’s rover, Mars Exploration Rover MER-B (or Opportunity). The picture found a human-like statue or a corpse lied down on the Red planet’s ground. It’s seen on one of the craters of Mars and is now raising interesting comments from many.

One from Youtube said, “The head by itself kind of looks Egyptian. Mars could have been Earth number one.”. While another said, “looks like an actual statue. There seem to be so many anomaly stones on Mars that at some point, one must admit that sometimes a rock is an ancient artefact.” And another said, “Statue!? How long would it take a lifeform to decompose?”

While it’s yet to be known, we too consume the people’s baseless theories as some alien’s dead-body or a statue crafted by previous lives. A meaningful assumption here is that it’s could have formed naturally by Mars resources and nothing to conspire much about it. Well, we shall see. What do you think?