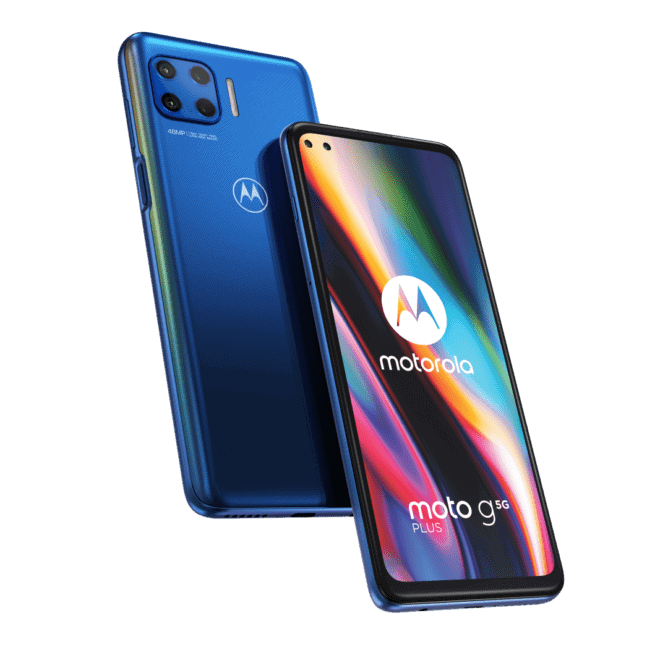 The Lenovo owned Motorola has just launched a new phone – Moto G 5G Plus. This handset is placed in the upper midrange tier and is available to Europe, UAE and Saudi Arabia only. It comes with a range of reasonable features including 5G support and NFS, which are found mostly in high-end phones only. The latest phone would be facing OnePlus 7, as it resides in the same price point, and still seems a great deal. Here’s how;

Moto G 5G Plus has a 6.7″ FHD+ display with HDR10 support and 90Hz refresh rate. The display has a dual punch-hole design with 21:9 aspect ratio. It runs on stock Android 10 OS and has Snapdragon’s 765G chipset with Adreno 620 GPU. That’s the same chip used by LG’s Velvet and Motorola’s Edge.

Upfront, there are dual sensors as 16MP (f/2.0) and 8MP (f/2.2) lens in the punch-hole design. Interestingly, it has the fingerprint sensor set on the power button, that’s mounted on the right side of the gadget along with volume buttons. Finally, powered by a 5000mAh battery with 20W fast charging support, and has all required connectivities within.

The phone’s currently available only in blue colour and is priced at €349 and €399 for the 4GB/64GB and 6GB/128GB variant. Motorola announced the handset is coming for Europe and UK primarily and will be available to UAE and Saudi Arabia soon. The company also announced that the US will not be receiving this handset, but will get another 5G phone under $500 by this year’s fall.