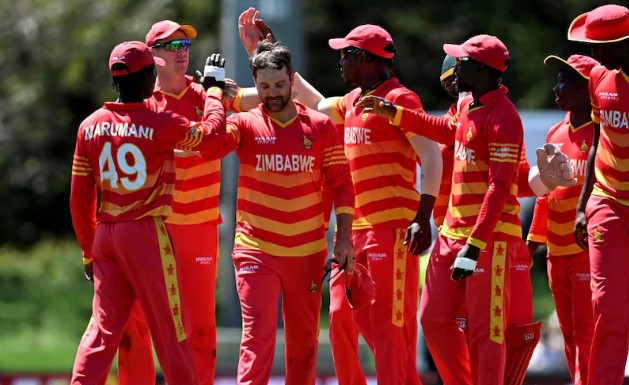 Zimbabwe made a historic win against Australia, beating them for the first time in ODIs in their own homeland! Zimbabwe bowlers – Ryan Burl and a couple of others have been the highlights, who bagged Australia for a cheap 141 runs – and eventually chased that. Here’s how it went;

Winning the toss and opting to bowl first, Zimbabwe has been scalping Australian batsmen in every other overs they bowled. Except for Warner (94), no other batsmen have stood for over 20 runs. Nyauchi (1/15), Brad Evans (2/35), and Ryan Burl (5/10) are the highlights, who forced Australia to wind up for 141 runs in 31 overs.

And with a target of 142 runs, Zimbabwe made a fair start of 38 runs to the first wicket but been losing ever since, until the 39th over – where they eventually surpassed the target line with 3 wickets in hand. Even with bowlers like Mitchell Starc, Hazelwood, Stoinis, and Adam Zampa, they managed to cross over the line carefully, registering their first-ever ODI win against Australia, in Australia.

Tadiwanashe Marumani and Regis Chakabva have blocked the fall of wickets and slowly breached the minimal target set by the Aussies. Ryan Burl, for his 5/10 against Australia, is the player of the match. Whereas Adam Zampa, for his respective bowling figures in the first two ODIs, earned him the player of the tournament.

Though Zimbabwe won this match, they had lost the ODI series by 1-2 against Australia, who took over the first two ODIs this week. Australia will now head to India for a quick T20 series before playing the T20 World Cup – organized in their homeland later this month.