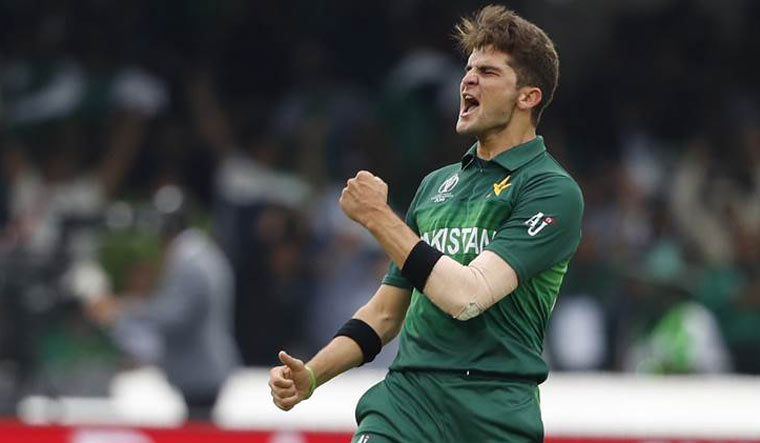 Coming back from an injury, Shaheen Shah Afridi has already made his mark in the ongoing T20I World Cup in their second match against Afghanistan.

While his bowling stats remained normal at the end, his in-swingers with the new ball and a deadly Yorker bowled to Rahmanullah Gurbaz were the highlights. Also, he injured Gurbaz – an Afghanistan wicketkeeper-batsman, so seriously that he was lifted out of the ground by a teammate.

Shaheen Shah Afridi, the ace pacer from Pakistan, has reintroduced himself in the ongoing T20I World Cup with 4-0-29-2 numbers.

While he got most of his beating in the death overs, his initial spell of the innings was commendable. He gave away only 7 runs in two overs while scalping both the Afghanistan openers.

One among them is Rahmanullah Gurbaz – the dashing Afghanistan opener who also keeps wickets. He was sent back to the dugouts with a serious injury on the toe – coming from a deadly Yorker bowled by Pakistan’s Shaheen Shah Afridi.

It seemed so serious that a substitute fielder from the Afghanistan team had to carry him off on his back to the dugouts.

A toe crushing yorker from Shaheen, gets Gurbaz and he was taken off the field in the shoulder by a team-mate. pic.twitter.com/L0nJ3lZ55l

This incident happened on the 5th ball of the very first over, and here’s what Cricbuzz commentators had to say about it;

That’s a beauty from Shaheen Afridi! Full, quick, and swinging in. It’s right in the black hole, and Gurbaz can’t dig it out. Gets pinned on the boot adjacent to the middle and leg. The big appeal for lbw and up goes the dreaded finger.

Golden duck! Afridi has his arms aloft. Good signs for the pacer and Pakistan!

Well, Afghanistan has fought back with the likes of Ibrahim Zadran and skipper Mohammad Nabi and posted a score of 154 runs on board. They’re now set to defend the average total, which is paused due to rain. Yet, stay tuned to us for quick updates on the highlights of the T20I World Cup.