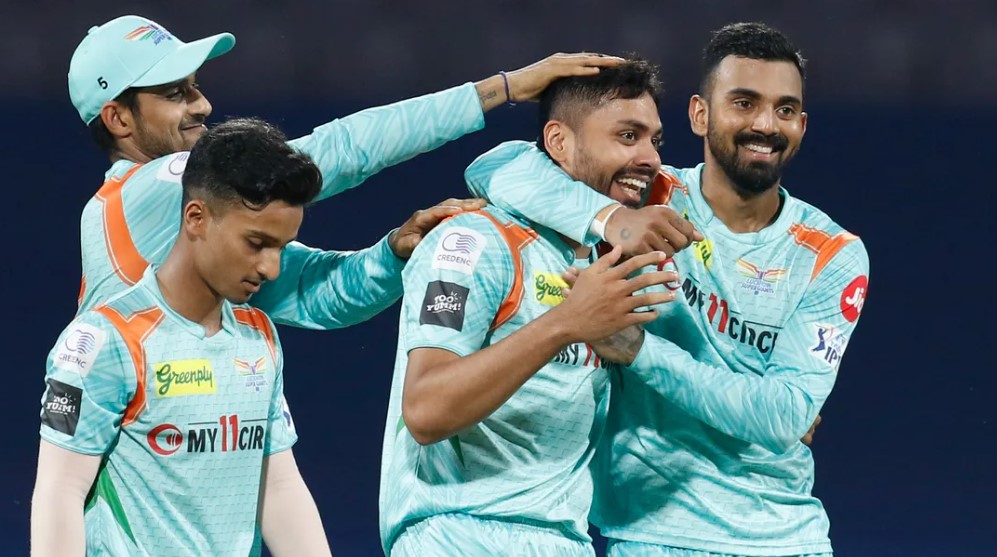 Sunrisers Hyderabad face their second defeat in a row, while Lucknow Super Giants had their second win in a row. With this loss, SRH belonged to the 20% of the teams that lost a match in chasing in DY Patil stadium.

Winning the toss and opting to bowl, SRH had a good start by sending de Cock, Evin Lewis, and Manish Pandey to dugout early, but failed to break a long partnership between Deepak Hooda and KL Rahul. With their 87-run stand and some quick boundaries in the end by Krunal, Ayush, and Holder, LSG had put up a fine score of 169 onboard.

Washington Sundar, Bhuvneshwar Kumar, and T Natarajan have been fairly good with the ball, while Romario Shephard and Umran Malik leaked most of the runs. But, with a reachable target of 170, SRH had a good start too.

But soon the openers were sent back by Avesh Khan within the power play. Yet, Rahul Tripathi and Aiden Markram tried to drag the scoreboard slowly and managed a good partnership too. But LSG’s Krunal Pandya stirred up the middle order, and tactical bowling by Avesh Khan again and Jason Holder at the end has collapsed the entire SRH’s batting line-up.

Even though Washington Sundar and Nicholas Pooran tried to pull it off at one point, they were eventually caught due to reckless shots caused by mounting pressure at the end. LSG’s Krunal Pandya and Avesh Khan have been exceptional, while their proper fielding placement too had helped to the win.