The 4th match of VIVO IPL 2021 has been the best in the tournament so far. There was a steady flow of runs from both sides and big scores posted by both the captains from either side. After a tough fight, Rajasthan Royals lost to Punjab Kings, who won with just a margin of 4 runs even after posting a mammoth total of 221.

Raining Sixes All Over Tonight

Losing the toss and forced to bat first, Punjab has maintained a good run rate from the beginning and did post a massive total of 200+ as expected. Punjab’s skipper, KL Rahul along with Chris Gayle and Deepak Hooda broke every blower’s form and made it hard for RR to bar them at any stage.

While KL Rahul 91(50) missed a century, Deepak Hooda 64(28) played an astounding inning to put a huge target of 221 on the board. RR’s skipper Sanju Samson has to trail with eight different bowlers to break Punjab’s form but didn’t work at a given stage. After all, RR’s debutant, Chetan Sakariya had made a fine impression with a reasonable economic rate at the end. 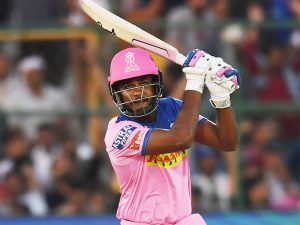 Walking in with a giant target, fans had little to no expectations that Rajasthan would win, unless the foreign batsmen Jos Buttler or Ben Stokes rise with some roaring innings. But they didn’t turn up and crashed all the hopes. Yet, Rajasthan’s skipper and Rahul Tewatia, who bet 5 sixes in an over last year against Punjab are the only hopes of making this happen.

And they didn’t let fans down. Sanju Samson made a blistering century of 119 (63) and raise hopes on winning, and fine support from Shivam Dube and Riyan Parag have somehow helped Rajasthan to cross 200. Even after conceding 10 runs per over, Punjab is still optimistic about a turnaround at some point.

Mohammad Shami and Arshdeep Nath stood at the heroes finally, who controlled Samson and taken key wickets. Finally, Arshdeep Nath conceding only 8 runs in the last over helped Punjab register their first win in the tournament. Sanju Samson was awarded the Man of the Match for his centurion knock.