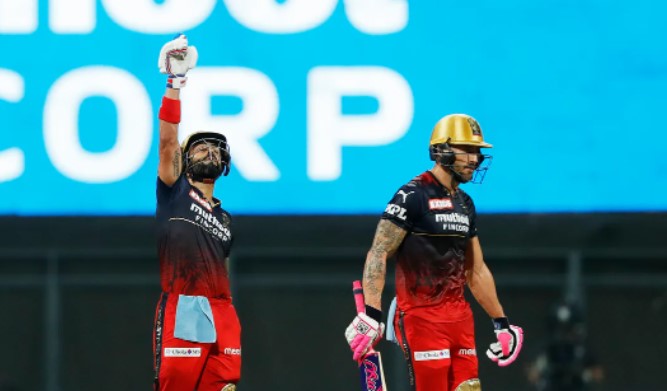 Tonight’s a dream night for RCB fans, especially the Virat Kohli. The RCB stalwart has made his season-best score of 73 runs and directed his team towards the victory with the skipper. Though tonight’s loss didn’t make a dent on Gujarat Titans, it did put SRH and PBKS off the playoffs race.

RCB now had only DC as its competitor, as it won tonight’s game in a steady manner. Here’s how it went;

Winning the toss and opting to bat first, GT lost their star opener, Shubham Gill, early, followed by slow innings from both the wicket keepers. It was Hardhik Pandya and David Miller who pumped GT’s score throughout the middle overs, and some lightning strikes from Rashid Khan at the end took scoreboard to 168 runs.

Except for Maxwell and Hasaranga, the rest of the RCB bowlers have been fairly thumped, with Siddarth Kaul and Josh Hazelwood taking the heavy beating. And with a target of 169 runs, RCB had finally made the dream start they wanted. Their current and former skipper – the Faf du Plessis and Virat Kohli duo has added 115 runs to the first wicket.

After Rashid Khan caught both of them in his back-to-back spell, Glenn Maxwell shone brightly with his 40* of just 18 balls to complete the job. Although, Virat Kohli’s 73 (54) earned him the player of the match award.

That's that from Match 67 as #RCB win by 8 wickets and are now 4th on the #TATAIPL Points Table.

With this win, RCB kept their play-off hopes alive and pray for MI to beat DC in the later fixture. Yet, RCB’s win tonight dumped Punjab Kings and Sunrisers Hyderabad off the race.