Punjab Kings get a much-needed win today, against Royal Challengers Bengaluru. The Kohli and Co. were outplayed by PBKS in both formats and made them face a significant loss. Punjab’s KL Rahul with the bat and spinners have become crucial in today’s win, helping them save their chances for the playoffs.

RCB Outplayed in Both the Innings 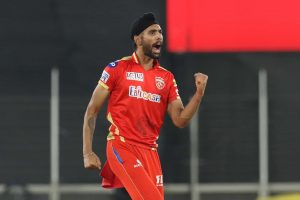 Winning the toss and opting to bowl first, RCB got the start they wanted. They struck the PBKS young opener, Prabhsimran Singh, for 7, and failed since later. Gayle smashed some quick boundaries and added 80 runs to the second wicket along with KL Rahul, and finally surrendered to Daniel Sams. While they got the rest for ducks later, KL Rahul and Harpreet Brar raced the scoreboard with firey innings at the end.

Except for Daniel Sams and Shahbaz Ahmed, PBKS punished all the other RCB bowlers. With a target of 180, Kohli and Co. started struggling since the beginning. They have lost Devdutt Padikkal early, while Kohli and Rajat Patidar grappled to draw runs. As they’re moving with a mere 6 runs per over run rate, Harpreet Brar caught both Kohli and Maxwell in consecutive balls and gave PBKS the control of innings.

But, RCB still had the hope of winning, since their savior de Villiers is on the crease. While de Villiers too is struggling to understand the Punjab bowlers, Harpreet Brar struck once again and collapsed the hopes of RCB to the ground. Ravi Bishnoi followed his with an impressive spell and pulled down the middle order, giving complete control of the innings to Punjab.

While Harshal Patel fought back at the end with some amazing boundaries, it was already too late. He didn’t get any support from his partners and eventually failed to chase. Thus, RCB lost their third match in the tournament and fallen into a negative net run rate, whereas PBKS strengthened their chances to their playoffs.