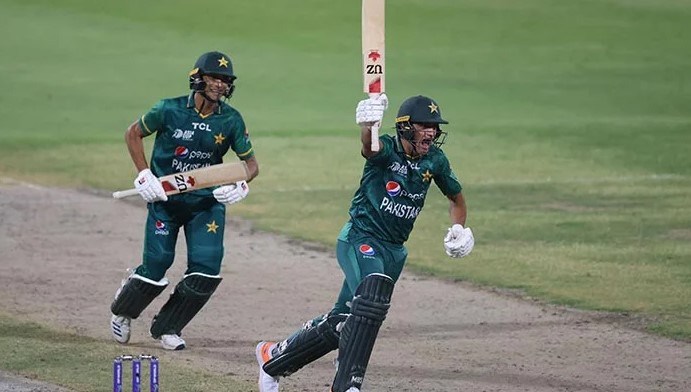 Last night’s match between Pakistan and Afghanistan is an absolute thriller! With the likes of Shadab, Asif Ali, and Naseem Shah, Pakistan finished a nail-biting chase against Afghanistan – and secured their spot in the finals of Asia Cup 2022. Here’s how it happened;

Winning the toss and opting to bowl first, Pakistan scalped both the Afghanistan openers within the powerplay – who seemed to be dangerous against them. Though they together had put 36 runs in just 4 overs to the first wicket, Afghanistan began struggling to gather runs since then.

Karim Janat, Najibullah, and others have failed in draw runs, but a couple of amazing shots from Rashid Khan at the end helped Afghanistan reach 129 runs in 20 overs. All the Pakistan bowlers have been reasonably economical, except for Mohammad Hasnain.

And with a target of meager 130 runs, Pakistan started struggling too, from the very beginning! It lost its skipper Babar Azam for a golden duck (so did Mohammad Nabi from Afghanistan’s side) and lost Fakhar Zaman for an unbelievable runout.

Though Rizwan tried to build up the innings with others, Afghanistan spinners jeopardized the score growth and forced Pakistan to move slowly. Mujeeb ur Rahman, especially, has bowled 17 dot balls in his four overs and conceded just 12 runs without a wicket!

Although Pakistan seemed to chase in the end, Afghanistan shifted gears to shake Pakistan in an amusing way. Their left-arm pacers – Fazalhaq Farooqi and Fareed Ahmad Malik scalped more than half of Pakistan’s wickets – in the last five overs!

Putting Afghanistan back in the race, they had almost restricted Pakistan to ending below their score. But a reliable batting from Asif Ali in death overs and a couple of unbelievable maximums from Naseem Shah took Pakistan home – with just one wicket and 4 balls left!

With this, Pakistan entered the finals of Asia Cup 2022, where it’ll be playing against Sri Lanka on September 11th, this Sunday. Meanwhile, both India and Afghanistan were out of the tournament but will be playing a match against each other tonight, as per the schedule.