After a close defeat in the first match, Mumbai Indians finally taste win today. The tournament’s 5th match is a typical one, between Mumbai Indians and Kolkata Knight Riders at Chidambaram Stadium, Chennai. KKR with the help of Russel and Shakib has restricted Mumbai for a mere score of 152 but failed to chase and lost by 10 runs. 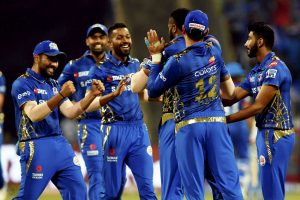 Winning the toss and opted for the bowl, Kolkata had a good start by sending back Quinton de Kock early. But, Mumbai’s skipper Rohit Sharma and Suryakumar Yadav have built a good partnership to finally put a respectable total on the board. KKR’s Andre Russell (5/15) had his first fifer in the IPL and stood as the second man for doing so against MI after RCB’s Harshal Patel.

With a chase-able target of 153, KKR didn’t seem to be worried at all after getting a good start from the openers Nitish Rana and Shubman Gill. They both added 72 runs to the first wicket and seemed to take KKR home until Rahul Chahar fastened their innings. Starting with Gill, he sent back Rahul Tripathi and skipper Eoin Morgan to Pavillion for low scores.

Soon, Nitish Rana started struggling as there’s no support from the other end. As he’s struggling to build a partnership, Krunal Pandya walked in to offset their winning hopes, with magical bowling (4-0-13-1) that struggled Dinesh Karthik and Andre Russell. Finally, they failed to stay afloat and have fallen for quickly for Bumrah and Boult’s bowling.

With this, Mumbai gets onto second place on the table and KKR fell to 5th. Rahul Chahar for his magical spin is awarded the Man of the Match.