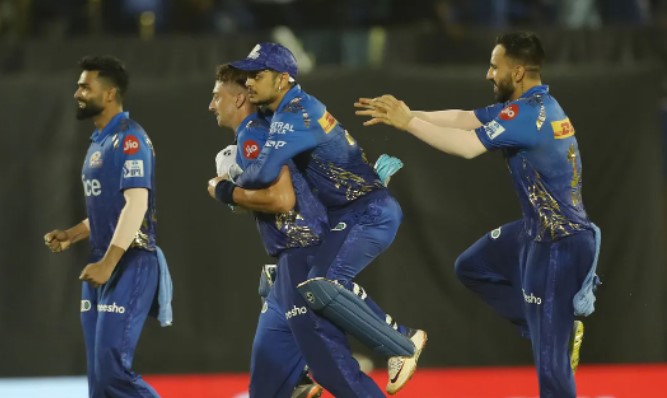 Tonight’s match against Gujarat Titans is a matter of pride for the Mumbai Indians team, who won against GT with the barest margins of 5 runs! Yet, this made no change in their fate, as MI sits at the bottom of the table while GT still hangs at the top. Although beating the best team this season gives MI some confidence for the rest of the IPL 2022. Here’s how it went;

Losing the toss and being forced to bat first, Mumbai Indians has finally made put up a good partnership to the first wicket. Both the openers – Rohit Sharma and Ishan Kishan, stood until the 8th over to add 74 runs in the opening stand, led by Tilak Varma and Tim David at the end, who scored big to post a target of 177 runs before GT.

In bowling, MI batsmen have fired at almost every GT bowler expect Rashid Khan, who took key wickets of Rohit Sharma and Pollard. With a target of 178, runs, Gujarat Titans made a good start too. Their openers Wriddhiman Saha and Shubman Gill made a 106-run partnership to the first wicket and completed most of the responsibility.

Though this seemed like a simple chase to GT, with Hardik Pandya and Sai Sudershan hitting in the middle, MI bowlers tightened them in the death overs, where they managed to restrict them to 172/5 in the designated overs. Some brilliant spells by Jasprit Bumrah and Daniel Sams at the end gave no chance to power hitters like Rahul Tewatia and David Miller, who stood as hope for GT.

For his power-hitting (44 runs off 21 balls) at the end, MI’s Tim David is named the player of the match. Though Mumbai Indians won this match, there’s no change in their position in the points table, nor with Gujarat Titans.