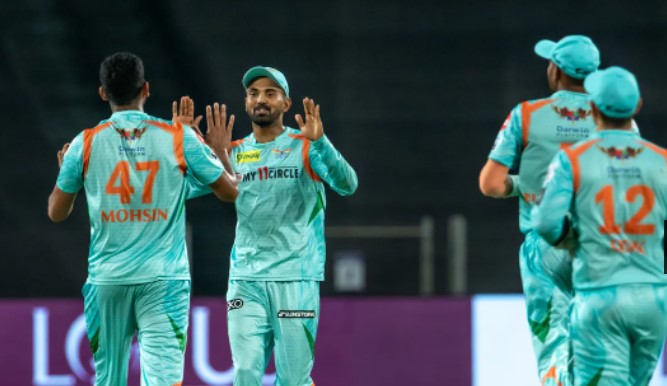 Lucknow Super Giants struck with another win in IPL 2022, this time by beating Punjab Kings with 20 runs. Though they had an unfortunate batting and doubted bowling, they carefully managed to defend the low-scoring total of 153 in 20 overs.

With tonight’s win, LSG stepped up a position to sit above Sunrisers Hyderabad, at No.3. And Punjab Kings remained at the same No.7 spot, with an increased negative net run rate! Here’s how it went tonight;

Winning the toss and opting to bowl first, PBKS had the dream start it wanted. The ace pacer Kagiso Rabada sent back LSG’s skipper KL Rahul, who’s been in dangerous form this season. But, LSG allrounder Deepak Hooda partnered with Quinton de Kock and added 85 runs to the second wicket.

Even the PBKS broke their partnership in the 13th over, and were taking wickets continuously, they failed to stop the flow of runs. Tailenders Jason Holder, Chameera, and Mohsin Khan managed some quick boundaries at the end to put LSG in a respectable position at last.

A brilliant spell from Kagiso Rabada 🔥

Expect for PBKS Sandeep Sharma, the rest have been fairly beaten by LSG batters. With a target of 154 runs, PBKS failed to set up a good opening partnership yet again, with both of them (Dhawan and Mayank) walking early for low scores. The Sri Lankan hitter Bhanuka Rajapaksa too was caught in brilliant Krunal Pandya’s spell.

Back to back wins for the Lucknow Super Giants 🔥

Yet, the English batsmen Johnny Bairstow and Liam Livingstone tried setting up a big inning, but eventually failed LSG pacers. Since then, none of the PBKS batsmen were successful in steering the team towards a victory. With the figures of 4-1-11-2, LSG’s Krunal Pandya was named the player of the match.