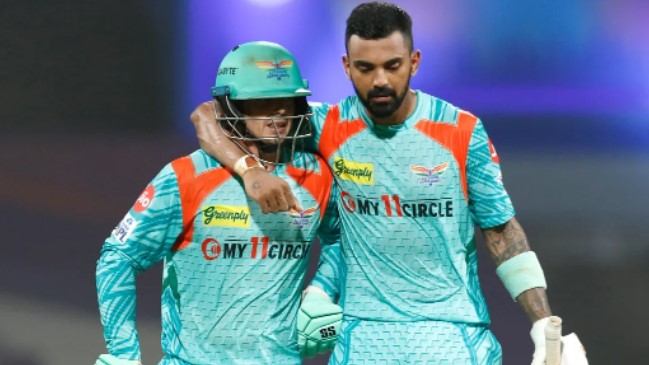 Tonight’s match between Kolkata Knight Riders and Lucknow Super Giants is nothing but a great thriller. LSG’s thumping batting throughout the innings and a star chasing by KKR are the highlights which ultimately lead to KKR’s elimination from the IPL 2022.

Winning the toss and opting to bat first, LSG openers have set a unique record tonight. Both Quinton de Kock and KL Rahul remained unbeaten till the end and becomes the only opening pair to play throughout the 20 overs in IPL history. They both have added 210 runs to LSG’s scoreboard, where de Kock beat 140* in 70 balls, and KL Rahul with 68 runs of 51 balls.

Together, they had smashed 13 four and 14 sixes and exploited almost every KKR bowler except Sunil Narine, who’s been fairly economical. And with a target of 211 runs, KKR lost both their openers within the first 3 overs, but the skipper Shreyas Iyer and Nitish Rana has stood up tall, and led the chase.

WHAT. A. GAME !!@LucknowIPL clinch a thriller by 2 runs.

After them, Sam Billings and Rinku Singh raced through the scoreboard but eventually failed to complete the job. LSG bringing Mohsin Khan and Ravi Bishnoi at right time helped them with crucial wickets, and end up with a slight margin of victory over KKR.

Though KKR maintained the CRR close to RR throughout the middle overs, they jumped up with some quick shots and seemed to chase down the huge target easily. But LSG used Marcus Stoinis and cleverly restricted them at the end. This match’s last over is considered one of the best in IPL history, as LSG won with a thin margin.

Heart goes out to Rinku Singh who played splendidly and got out to hell of a good catch. What a brave innings little boy. More coming in your way. #LSGvsKKR #TATAIPL pic.twitter.com/DluymS27Cv

With this loss, KKR is out of the tournament, while LSG advanced to the No.2 spot. We wait to see if LSG can stay in the top 2, as Rajasthan Royals too has a chance of settling at that spot in a couple of days.