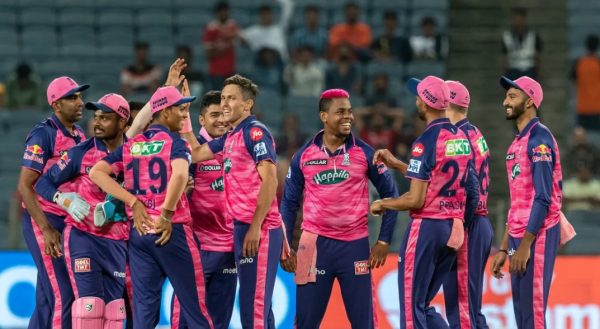 Rajasthan Royals introduced themselves this year with a bang. They thrashed Sunrisers Hyderabad with a large margin today, shooting themselves up to the top of the table.

Sunrisers Hyderabad, on the other hand, continues its losing streak from the previous season with the likes of poor batting and bowling. They were defeated by a huge margin of 61 runs, denting their later growth in the tournament already.

A Great Start For RR

Winning the toss and choosing to bowl, Sunrisers were made to regret from the very beginning of the match. Every bowler of them has leaked runs in all their spells and entertained fans with continuous boundaries.

Their top and middle-order batting line-up have been exceptional, driving the scoreboard to a whopping 210/6 at the end of 20 overs. Since the beginning of their innings, every player has contributed in their own way to keep up the run rate around 10, and eventually crossed the 200 mark in 19th over itself.

And it’s not just the credit to Rajasthan batsmen, but also the utter failure of SRH bowlers too. Top picks like Romario Shephard and Washington Sundar have been really expensive, alongside the youngsters Umran Malik, Natarajan, and even the experienced Bhuvneshwar.

Though SRH had the hitters who can chase such targets, RR didn’t give them a chance in any way. Royals’ pacers – Trent Boult and Prasidh Krishna showed their wrath from the beginning. While Krishna picked important scalps like Williamson and Rahul Tripathi, Chahal and Boult gripped SRH’s middle order.

At one point, SRH didn’t even seem to make it to 100, but an explosive partnership of 50(19) from Aiden Markram and Washington Sundar has taken the team’s score to 149 runs in total. Yet, they face a huge blow with a 61-run defeat, costing them a -3.050 net run rate in the points table.