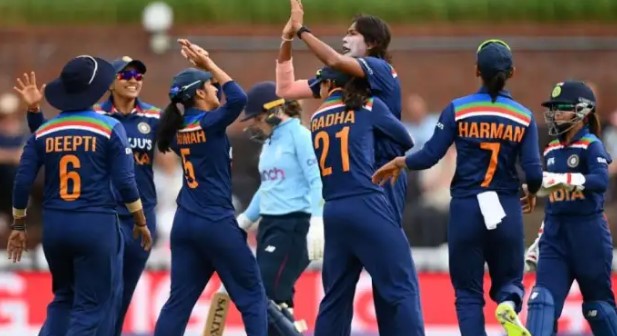 After losing the T20I series by 1-2, Indian women are now successful in clean sweeping the ODI series against England (3-0). In a low-scoring match at the Lord’s stadium, Indian bowlers have restricted England women to fall short by 16 runs and bid a grand farewell to the Jhulan Goswami – who’s retiring today.

Winning the toss and opting to bowl first, England caught four of Indian batters within the powerplay – with two of them going for ducks. Though Smriti Mandhana stood tight from the beginning, she lacked a proper partner – until Deepti Sharma turned up. Together, they made a 58-run partnership at a slow pace but stopped the fall of wickets.

Well, this was until Kate Cross struck again – who scalped all four initial wickets of the Indian batting line-up. After Mandhana’s fall, it was Pooja Vastrakar and Deepti Sharma who added some more crucial runs to the scoreboard.

Though Deepti Sharma and Mandhana managed to score their respective fifties, the total score has settled at 169 runs, all out. Throughout the innings, five of the Indian batters have gone ducks – including Jhulan Goswami, who played her last ODI match tonight.

And with a target of 170 runs in 50 overs, England made a slow start too and lost both their openers to Renuka Singh within the powerplay. Continuing the rage, Renuka scalped two more wickets, too, in her next spells. And while England seemed to be losing in a low-scoring match, it was the young Charlotte Dean – who gave hope of reaching the target with good batting.

She partnered with Kate Cross and Freya Davies to add 70 more runs to the scoreboard and seemed to take England home successfully. But Deepti Sharma played her wit to Mankad Dean out in the non-striker’s end when the match was in critical condition.

Though it ended in a bitter way, the game Indians played is still within the rules and helped them clean sweep the 3-match ODI series against England. With this, they bid a happy farewell to the Indian veteran bowler Jhulan Goswami from the ODI cricket.