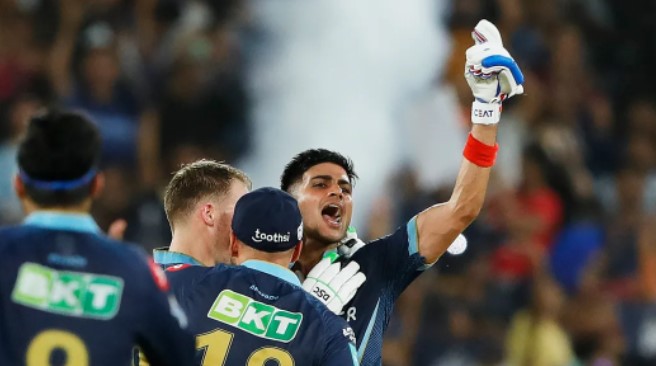 In a sensational low-scoring match tonight, Gujarat Titans wins the IPL 2022 champions title in their maiden season! GT’s all rounding performance helped the team to chase a simple target put up by RR in no time. Skipper Hardik Pandya has been excellent with both bat and ball, and also with his strategies of locking RR to a low score.  Here’s how it went.

Winning the toss and opting to bat first, Rajasthan Royals had a good start from Yashasvi Jaiswal. But after him, Samson and Co struggled at every stage of their innings. All their star batsmen have failed, with only tailenders having a strike rate of more than 150 by the end of the innings. To choking bowling from Rashid Khan, Yash Dayal, and Hardik Pandya, GT was able to restrict RR to a mere 130 runs in their designated overs.

The @hardikpandya7-led unit, in their maiden IPL season, clinch the title on their home ground – the Narendra Modi Stadium, Ahmedabad. 🙌🙌 @GCAMotera

But with a simple target of 131 runs, RR didn’t let the game go that easily to GT. Prasidh Krishna and Trent Boult pulled out both the GT wicket keepers early, and Chahal tried to choke the rest a bit.

This led the GT skipper Hardik Pandya and Shubman Gill to score slowly, but they were still on the right path to victory. And after Hardik walked back in 14th over, David Miller finished the rest of the job in style. He ran through the RR bowlers at the end and put off the match pressure, taking Gujrat Titans home early.

What a dream debut season for Gujarat Titans. @hardikpandya7 has been absolutely brilliant as a leader and player. This has been a fantastic IPL and great to see a new champion. Jos Buttler was in a league of his own and Rajasthan Royals can be proud of their season. #IPLFinal pic.twitter.com/dnTKOoAO4K

With this win, Gujrat Titans become the second-ever team in IPL history to win the champions title in their maiden season, with the first being Rajasthan Royals in 2008 – which is also the inaugural season of IPL. Hoping that you had enjoyed the whole season and our coverage, we’ll meet you with more updates on more sports. keep checking us.