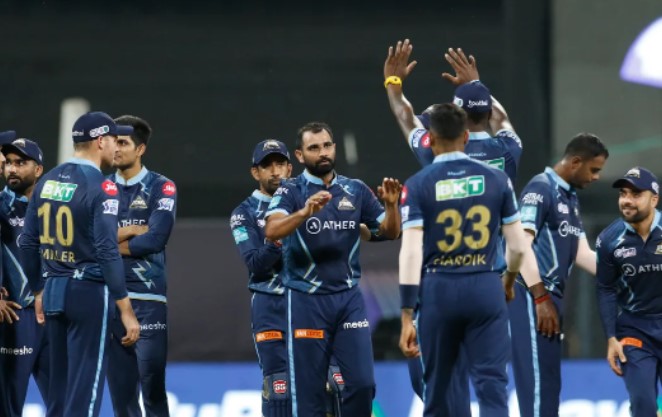 In an absolute thriller, Gujarat Titans won over Sunrisers Hyderabad with 5 wickets in hand. Tonight’s match has a nail-biting finish from GT’s Rashid Khan and Rahul Tewatia, who played extraordinary innings to seek revenge on SRH from their first loss. Here’s how it went;

Winning the toss and opting to bowl first, GT had the start it wanted by sending Kane Williamson back. The reliable SRH batsman, Rahul Tripathi too walked back after playing some quick shots. But the other opener Abhishek Sharma and Aiden Markram gathered a huge 96-run partnership and raced through the scoreboard with a near 10-run rate.

Although GT caught Nicholas Pooran and Washington Sundar too for cheap scores, the debutant Shashank Singh has bulldozed through Lockie Ferguson, GT’s super-fast bowler to squeeze 25 runs in his last over. His smashing took Hyderabad to 195 runs in designated overs.

You rock big time to allow millions to dream. Unbelievable @IPL for the stage you provide for opportunities to the unknown. Shashank Singh. Wow. @SunRisers #IPL2022 pic.twitter.com/Wa0r7hBkUT

And with such a huge target, Gujarat Titans made a good start by adding 69 runs to the first wicket. The constantly-failing Wriddhiman Saha has shined tonight with a 68(38) knock, that helped GT manage the required run rate at all levels. Although Gill, Hardik, and David Miller walked back to the dugout soon, their middle-order finished the job in a style!

🎼 Can we have this with Titanic theme playing in background please? 💙pic.twitter.com/BNI9fg61co

Rahul Tewatia (40*) and Rashid Khan (31*) have been excellent, both chasing down the heavy target just in time.  SRH’s prime bounder – Marco Jansen has been an utter failure tonight, probably leaking the highest number of runs in this season (4-0-63-0). Except for Umran Malik (4-0-25-5), the rest of the SRH bowlers are equally thrashed by GT batsmen at all stages.

With this win, GT shoots up to 1st place in the points table, while SRH remained in the current 3rd spot. Though GT’s Tewatia and Rashid played a significant part in their win, SRH’s Umran Malik was awarded the player of the match.