Today’s match between Sunrisers Hyderabad and Delhi Capitals is an absolute thriller at the end. This has become the first match of IPL 2021 to drag upto a super over and end with Delhi winning the match ultimately. DC’s skipper Rishabh Pant, Axar Patel, and Avesh Khan have played critical roles in their win, and wasting the fighting innings of SRH’s Kane Williamson.

Delhi Beats Hyderabad in a Super Over Thriller 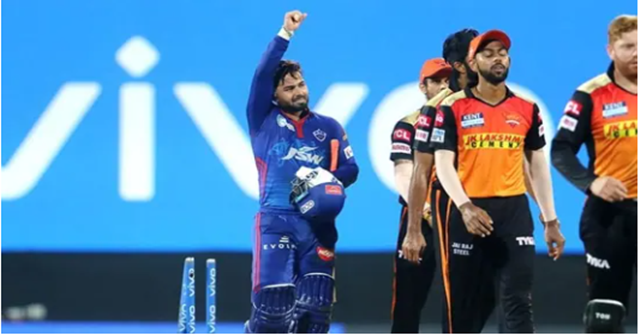 Winning the toss and electing to bat first, Delhi had a good start with the likes of Prithvi Shaw and Shikhar Dhawan. They went onto make a partnership of 81 runs of 10 overs until Rashid Khan finally broke the momentum.

After them, DC’s skipper Rishabh Pant and Steve Smith carried the innings slowly and put a respectable total on the board to defend. Though the start was perfect, they struggled drawing runs from SRH bowlers. A new uncapped player named Jagadeesha Suchit is the only bowler who ended with the fair economy.

With a chase-able target of 160, SRH struggled since the inception. Openers David Warner and Johnny Bairstow walked out before the power play and put pressure on later batsmen. After them, the SRH innings didn’t seem to go well in any case, as both young (Virat Singh, Abhishek Sharma) and experienced players (Kedar Jadhav, Vijay Shankar) struggled to get runs.

Though the wickets are falling regularly, SRH’s only hope for win stood in the form of Kane Williamson, who remained unbeaten 66(51) till the end. DC’s Axar Patel, Avesh Khan, and Amit Mishra collapsed the SRH hopes ultimately.

The chase ran close till the end, with DC having bright changes of winning. But, SRH’s Jagadeesha Suchit surprised everyone with a last over six and a four Before that and kept winning hopes alive with a draw match. But, SRH failed again!

With an aim of scoring big in the super over, SRH’s David Warner and then exhausted Kane Williamson walked into the crease. But their hopes were pumped down by DC’s Axar Patel, who bowled brilliantly and conceded just 7 runs in his super over. David Warner’s short run off the last ball is yet another mistake they did, which cost them a lot in the end.

With a new target of 8 runs off 6 balls, Delhi is confident of pulling since SRH didn’t have a senior pace bowler. While this thought is daunting, Warner, just like Pant, handed the ball to Rashid Khan and experimented with him. And this seemed to work, at least till the end. He managed to restrict the Delhi batsmen, Rishabh Pant and Shikhar Dhawan under the target, but ultimately lost it.