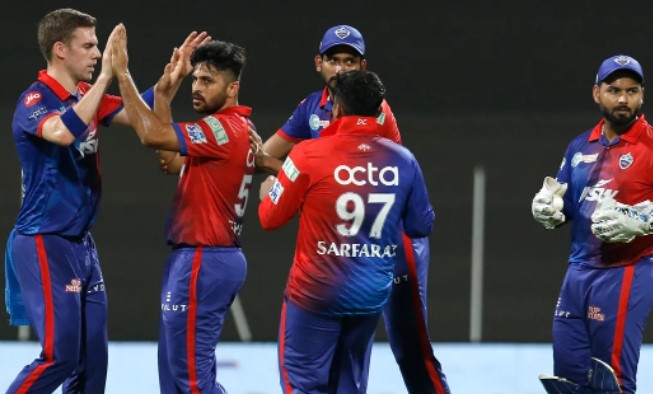 One of the critical matches that decide the fate of most middle-staged teams has just ended in a thriller. Tonight’s match between Delhi Capitals and Punjab Kings had DC push itself into the top 4 in the points table, as they successfully defended their sub-160 score. Here’s how it went;

Winning the toss and opting to bowl first, PBKS made a great start by dismissing David Warner in the very first ball. But this unlocked the young Sarfaraz Khan to burst out with boundaries, who together with Mitchell Marsh added 50+ runs in the first five overs. After his walkout, DC’s run rate slowed down due to tight bowling by PBKS’ spinners throughout the middle order.

While they seemed to settle at the sub-150 score, Mitchell Marsh, with some fine shots at the end too Delhi Capitals past 150 runs to score to put up a fair 160 runs target for the PBKS.

This didn’t seem a big one for PBKS, considering their hard-hitting batting line-up, which is also one of the strongest this season. But, DC bowlers showed their wrath tonight by picking one by one of them at almost every over!

That's that from Match 64@DelhiCapitals win by 17 runs and add two crucial points to their tally.

PBKS’s top and middle-order crashed to DC’s mixed bowling techniques, who seemed to wind up under 100 runs in total. But, Jitesh Sharma, PBKS wicketkeeper, tried setting up the path straight slowly. However, he dragged the scoreboard slowly, none from the other end supported right in them. Though Rahul Chahar played some good shots, it was too late.

With Punjab Kings losing this match, their chances for play-offs become so tight. DC, on the other hand, brightened its path, now sitting at the No.4 spot and seemingly the highest potential team to enter playoffs.