SRH’s bad luck continues to follow, as they lost their 5th match (out of 6) already in the tournament. This time, against Chennai Super Kings, who beat Sunrisers Hyderabad by 7 wickets and 9 balls left. CSK’s openers shone brightly and played a key role in their win. With this result, CSK punches to the top with the highest net run rate, whereas SRH remains at the bottom of the points table. 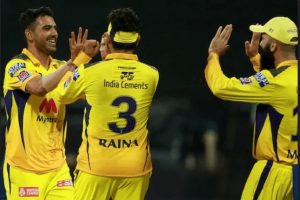 Chennai Super Kings is continuing its fine form this season, as they captured their fifth win today against Sunrisers Hyderabad. Winning the toss and choosing to bat, SRH didn’t get the start they wanted. Their super striker England batsman Johnny Bairstow was caught by Sam Curran soon and provided an early breakthrough to CSK.

But, the second wicket partnership was made strong enough to put a respectable score. Manish Pandey and David Warner have added 100+ runs after Bairstow’s fall and took walked out one by one. Clever boundaries by Kane Williamson and Kedar Jadhav at the end have driven the score to surpass 170.

Though the defendable, SRH didn’t get a breakthrough until the 13th over. CSK openers Ruturaj Gaikwad and Faf du Plessis have added 129 runs to the first wicket and departed quickly. Then walked in Moeen Ali too has been caught by Rashid Khan for a low score, but the damage was already done. The openers striking innings took the pressure off the next batsmen, who slowly took CSK home with a win.

Though the match was lost, SRH’s skipper David Warner has reached certain milestones in this match. These include surpassing 10,000 T20 runs, hitting 200 sixes in IPL, and scoring 50th IPL fifty. Whereas Suresh Raina from CSK hit 500 fours in IPL, also touched this milestone with this match.