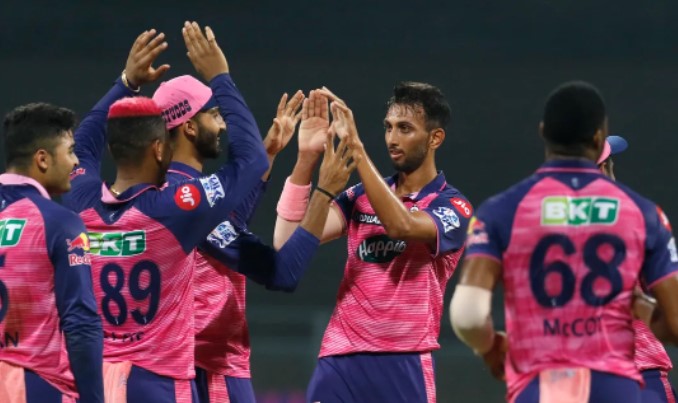 Tonight’s match between Delhi Capitals and Rajasthan Royals ended as both dramatic and a thrilling one, with RR winning the match by 15 runs. This win pushed RR to the top of the table, and DC remained at 6th position but with the highest net run rate among all.

Winning the toss and opting to bowl, DC didn’t get the start it wanted. RR openers struck the chord with a massive 155 runs partnership to the first wicket in 15 overs and ended up at 222 runs in designated overs.

While Devdutt Padikkal made a half-century, Jos Buttler scored yet another ton of 116(65). RR’s skipper Sanju Samson too made a fine knock of 46(19) to inflate the team’s total. In total, they have together scored 35 boundaries in their innings.

With a huge target to chase, DC openers David Warner and Prithvi Shaw made a good start by adding 43 runs in 4.3 overs. But their duo was broken by Prasidh Krishna, who later took two more crucial wickets of Rishabh Pant and Lalit Yadav.

He even went on to make the 19th over a maiden, which turned the match altogether. Though Rovman Powell struck some big shots, it was too late for DC to cross the bridge, as they finally winded up at 207/8 in 20 overs.

The Final Over Drama

With the 19th over going as a wicket-maiden for DC, the team is left with just 6 balls to score 36 runs. And with Rovman Powell on the crease, this seemed possible at a very low hope. Yet, he hit three sixes in the first three balls, which gave Delhi hope. But a close-call no-ball bowled by Obed McCoy started all the drama.

Dissatisfied by the umpire’s stance of not declaring a no-ball, Rishabh Pant called his batters on crease back to the dugout as an immediate protest. Though they begged to review this ball with a third umpire, the on-field umpires decided not to change and asked the batters to continue.