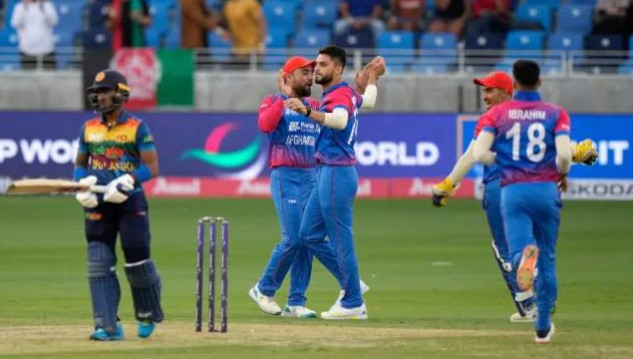 Afganistan is on a roll in Asia Cup 2022. After defeating Sri Lanka by a huge margin in the inaugural match, they not stumped down Bangladesh with a 7-wicket win. Afganistan’s Najibullah Zadran and Mujeeb ur Rahman made some important knocks to win against Bangladesh in an exciting way. Here’s how it went;

Winning the toss and opting to bat first, Bangladesh lost both their openers and the skipper Shakib Al Hasan within the powerplay. While the top order was scalped by Mujeeb ur Rahman, the middle order was taken by Rashid Khan.

Except for Mahmudullah and Mosaddek Hossain, none of the Bangladesh batsmen have reasonable contributions to the score. With that, Bangladesh had setup a cheap target of 128 runs for Afghanistan.

While it seemed simple for Afghanistan, considering its dashing opening batsmen and reliable middle order, they too started struggling till the end. Removing Rahmanullah Gurbaz early, the Shakib and Co. continued to pressure Afghanistan till the end.

Though they were slow, scoring less than 60+ runs in 13 overs, Afghanistan added the remaining runs in the next 5 overs! And it was by Zadran’s – both Najibullah and Ibrahim – who made a critical 59-run partnership to hand Afganistan their second win in the tournament.

With this win, they now sit at the top of Group B table, and wait for the second semi finalist from Group A. Bangladesh, on the other hand, will be playing against Sri Lanka tomorrow to check their fate. Sri Lanka has already lost to Afghanistan in the inaugural match, so winning against Bangladesh is a must for them.