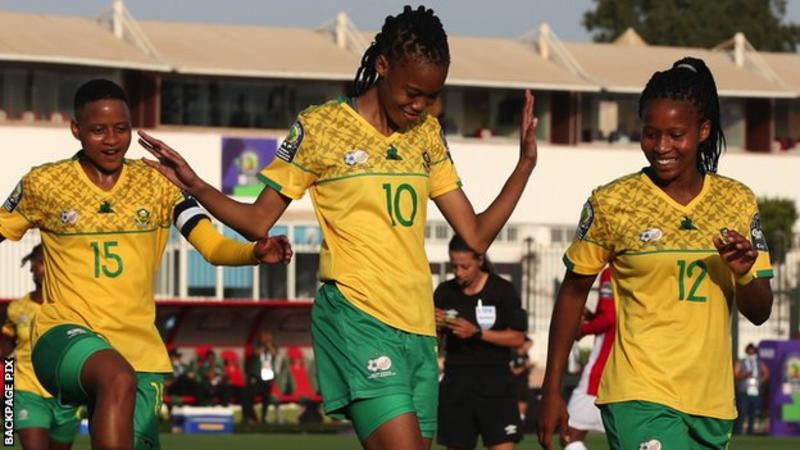 South Africa secured their spot in the championship game of the Women’s Africa Cup of Nations (Wafcon) with a victory over Zambia that was decided by a disputed injury-time penalty that handed them a 1-0 win.

After an extensive assessment by the video assistant referee, Lidya Tafesse pointed to the area where South Africa forward Jermaine Seoposenwe collided with Martha Tembo. Tafesse also indicated the location of the contact.

The four-time runners-up in the Wafcon competition advanced to Sunday’s championship game thanks to a goal scored by Linda Motlhalo in the 94th minute.

Catherine Musonda, the goalkeeper for Zambia, produced an outstanding stop to deny Hildah Magaia late in a match that featured few clear chances in Casablanca. This came shortly after Grace Chanda’s strike went just narrowly wide at the opposite end.

The second semi-final will take place in Rabat later on Monday. It will determine whether Morocco, who is hosting the tournament, or Nigeria, who is the current champion, will meet South Africa in the final (20:00 GMT).

The manner in which Zambia were eliminated from the WAFcon will be very frustrating for head coach Bruce Mwape and the rest of his Copper Queens squad. Zambia were making their first appearance in the WAFcon semi-finals in their third trip at the competition.

When Seoposenwe fell down in the 89th minute, South Africa did not make any appeals, and replays indicated that Tembo had stopped an attempted pass before the momentum of Banyana Banyana forward Seoposenwe took her into the Zambian defence.

Motlhalo scored her second goal of the game to propel Desiree Ellis’ side through to the next round of the competition. The Ethiopian referee Tafesse awarded the penalty three minutes later, after checking her pitch-side monitor and determining that the challenge warranted a penalty.

After failing a late fitness test, Zambia’s first-choice goalkeeper Hazel Nali was benched, and the team was already playing without captain Barbra Banda because of gender eligibility difficulties.

Her replacement Musonda had little to do in the first half as Zambia had the better opportunities, with Lubandji Ochumba bundling wide early on and Siomara Mapepa unable to get on the end of an enticing ball from Chanda. However, Zambia did walk into the break with a 1-0 lead.

When Noxolo Cesane fell down after being tackled by Lushomo Mweemba at the hour mark, South Africa thought they should have been awarded a penalty since they had a good case for it. South Africa, who were playing without their star striker Thembi Kgatlana due to an injury, contributed very little.

However, a check by the video assistant referee revealed that the foul occurred beyond the penalty area, and Seoposenwe sent her free kick high over the crossbar.