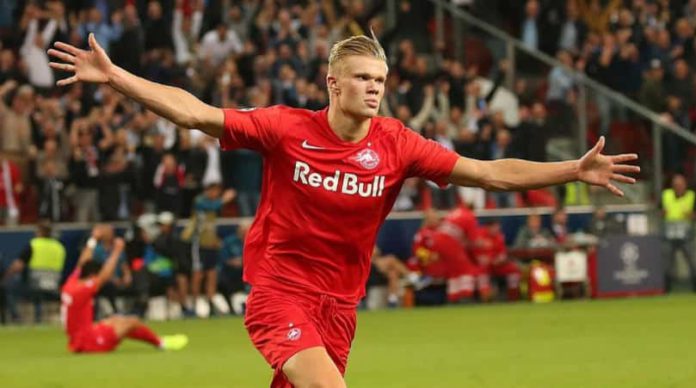 According to reports from the English outlet, The Telegraph, Manchester United are currently the front-runners to land RB Salzburg striker Erling Braut Haaland this January.

The nineteen-year-old has become a sensation following his outstanding displays in Europe in the first half of this season. Haaland has netted an impressive 28 goals in 21 games in the Austrian first-tier league and scored eight in his first six Champions League games.

However, United are set to face stiff competition for the Norwegian given that RB Leipzig and Borussia Dortmund are also tracking the player. Dortmund, especially, are in need of a proper number nine and can offer Haaland a regular starting spot.

The striker is also said to have visited the Dortmund and Leipzig training grounds but is yet to make a final decision. Italian giants Juventus are also keen on making an offer.

The interested parties are also aware that Erling Haaland can be signed for a meager £20m fee in January, thanks to a clause in his contract.

Manchester United definitely have an edge over the other parties given the fact that the Norwegian worked with Ole Gunnar Solskjaer at Molde last year, before moving to Austria this season.

The Red Devils are yet to find a replacement for Romelu Lukaku, who left for Inter Milan this summer. At present, Solskjaer’s attack is being led by Anthony Martial, Mason Greenwood, and Marcus Rashford.

Haaland could be a great fit at Old Trafford knowing that both Rashford and Martial can play behind the no.9. For what it’s worth, the Norwegian could also strike up a partnership with Mason Greenwood up top.

Haaland is also rumoured to harbour an ambition of playing in the Premier League like hi father Alf-Inge, who plied his trade for Manchester City as a midfielder. However, United could also face complications in the deal knowing that the player is represented by Mino Raiola, who also happens to be Paul Pogba’s agent.

After their 4-0 victory over AZ Alkmaar, Manchester United are now preparing to face Everton in the Premier League his Sunday.