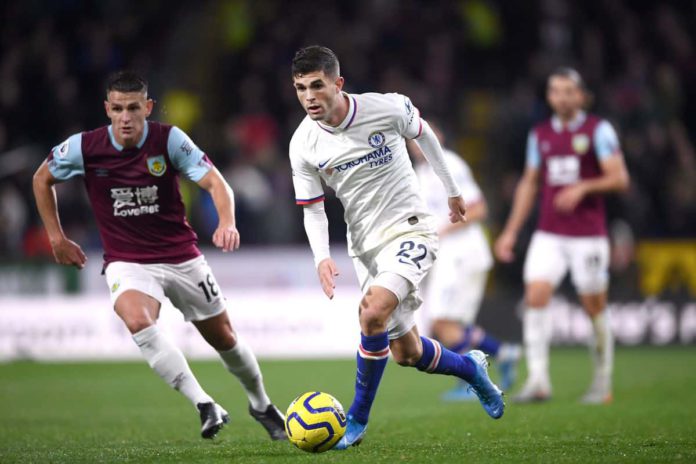 Premier League giants Chelsea will welcome 15th-placed Burnley on Saturday. Frank Lampard will be eager to grab another three points to strengthen his position as the Blues sit 4th in the table with 36 points from 21 games.

Chelsea was robbed of a victory in their 1-1 draw away to Brighton last weekend, with Alireza Jahanbaksh netting an absolute screamer to snatch a point.

Meanwhile, the Clarets will be more than keen on a victory at Stamford Bridge, given that they have lost their last three Premier League games.

When is Chelsea vs Burnley and where can I watch live?

Christian Pulisic and Marcos Alonso are doubts for today’s clash but should be fit in time for the fixture. Ruben Loftus-Cheek and Marco van Ginkel remain long-term absentees for Frank Lampard’s side.

Sean Dyche will have a headache placing 11 men capable of grinding out a positive scoreline at Stamford Bridge. The Clarets have a long injury list, with Chris Wood, Aaron Lennon, Ashley Barnes, and Phil Bardsley all set to undergo last-minute checks for this showdown.

Johann Berg Gudmundsson could be out due to a thigh injury but Ben Gibson is being touted for a return.

Burnley may be out for a victory, but it simply doesn’t appear that they will be getting one. Given all the injury concerns and the fact that they will face a Chelsea side hungry for victory,