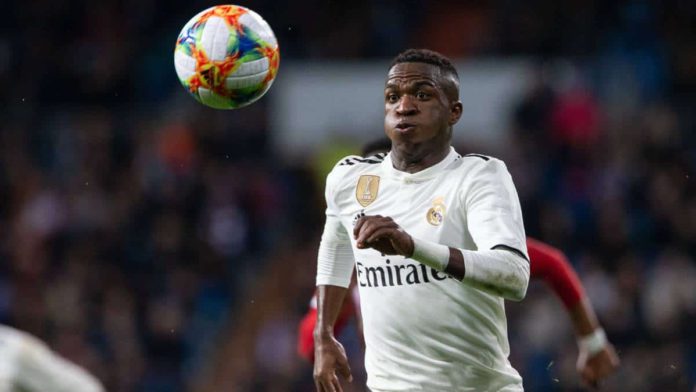 Real Madrid forward Vinicius Junior is reportedly attracting a host of Premier League clubs over a transfer. Manchester United, Arsenal, Chelsea, Tottenham, and Wolverhampton Wanderers are interested in knowing if there is a chance of signing the 18-year-old in January.

Vinicius, who joined Real Madrid for a hefty fee last season, has failed to make the expected impact. The arrival of Zinedine Zidane has seen his game time is reduced even more. He has made only 10 LaLiga appearances. He has 2 goals in 14 games in all competitions as of late.

Vinicius was overlooked yet again in Real Madrid’s stalemate with their fierce arch-rivals Barcelona. The publication reported that the winger demanded an explanation from the coach for the snub.

As it happens, Vinicius isn’t short of options outside England either. Inter Milan, Paris Saint Germain, and AS Roma are also interested in signing him.

However, the Brazilian is considering staying beyond January to give his Real Madrid future another chance.

Zidane, meanwhile, is hoping to keep hold of his young starlet. The Frenchman was quick in his attempts to quash rumors and speculations regarding his exit, as he said,

“What changed is that there’s [Eden] Hazard and there’s Rodrygo [Goes]. He’s training well but now there are other important players and I have to choose.”

It remains to be seen if Vinicius does earn more playing time at the Santiago Bernabeu henceforth. Real Madrid will welcome Athletic Bilbao at home as they aim to stay with Barcelona in the tussle for the title.