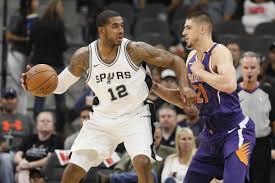 San Antonio Spurs have played total seven games in last two weeks, their record is 4-3 having a 1 point differential average. They had made the record of 5-2 against spread, with 2.2 ATS average outcome, including pre game line of -3.2 average.

Phoenix Suns have a 11-41 record (22-30 against the spread) to this point this season and presently sit within the last place of the West. They had lose 9 of their last 10 matches and in their last game they lost on the road against the Lakers with a 102-116 score, not beating the chances.

Last games of Spurs vs suns

In their three previous participations earlier this season the Spurs are leading 2-1 wins having won the previous home game by 25 points. Spurs have a 19-7 home record, while the Suns are 4-22 on the road. Spurs are better both offensively, scoring 112.3 ppg to Suns’ 105.7 and defensively, allowing 109.7 ppg to Suns’ 115.5.

Spurs are the despotic favorite and Vegas odds give them a -14 spread and predict them to beat the odds at home against menial Suns squad.