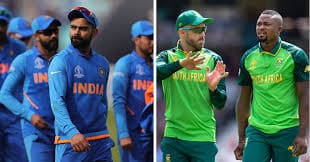 In the World Cup Cricket 2019, Team India will play their first match on Wednesday, June 5. This match of the Indian team against South Africa starts at 3 pm on Southampton’s Rose Bowl field. Team India’s performance in two warm-up matches was not something special. The defeat from New Zealand was won by Bangladesh. Now if the main matches are being started then there will be no scope for any negligence. Here we are giving you information about the possible playing 11 of both teams.

Team India: Rahul can get a chance

Before the start of the World Cup, if anything was discussed, then who would bat at four numbers in Team India? Two names are in discussion. Dinesh Karthik and KL Rahul. Rahul did well in the IPL and after reaching England, he scored a century in the warm-up match against Bangladesh. It is believed that Team Management will give Rahul the opportunity to number four. Kedar Jadhav has become completely fit. But, it is decided to play either one of Ravindra Jadeja or Ravindra Jadeja.

It could be the playing eleven of Team India

Three players are injured. Dale Steyn, L. Enigidi and Hashim Amla Stan’s shoulder injury were bothering him for two years. Now they are out of the World Cup. Their place has been called Burren Hendricks. But, it is very difficult to get into the match against India. Lungi Ngidi was hurt against England He has now been out of the team for two weeks. Hashim Amla was on the bouncer helmet of Joffra Archer in the match against England. According to media reports, Amla has a headache. But, he can also play.

It can be South Africa’s Playing 11