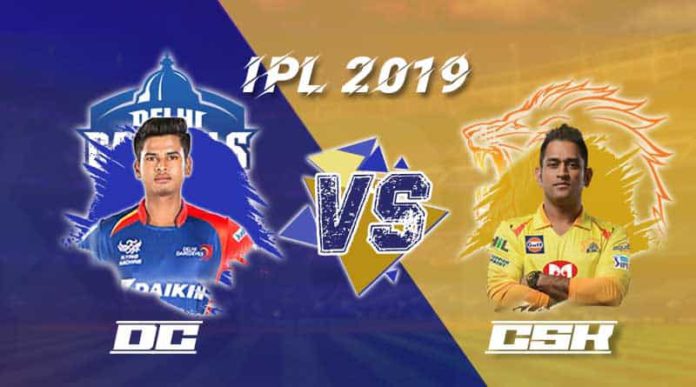 The current champion Chennai Super Kings defeated Delhi Capitals by six wickets in the fifth match of the 12th edition of the Indian Premier League (IPL-2019) played at Ferozshah Kotla ground here. This is Chennai’s second consecutive win, while Delhi has faced the first defeat in two matches. In this match, Shane Watson is ‘Man of the Match’.

The Last season champion of IPL CSK or Chennai super kings defeated Delhi Capitals by Six wicked at Ferozshah Kotla Stadium. This was the Fifth match of the 12th edition of The IPL 2019. The is CSK’s 2nd consecutive win after defeating Virat Kohli’s Royal Challengers Banglore. Shane Watson is “Man of The Match”.

After Winning the Toss Chennai bowled first, restricted Delhi capitals to make a big target and stop them at 147/6. They achieved the target by four wickets and 2 balls lefts.

While chasing the target Shane Watson make winning 44 scores and 52 run partnership with Suresh Raina for the Second wicket. They lost the first wicket at 21 in 2.4 overs of Ambati Rayudu.

Shane Watson makes 44 by Four Fours and 3 big sixes in 26 balls only. He was caught by the Amit Mishra by Stumpingit out. Raina also became Mishra’s Second wicked. Raina made 30 runs out of 16 balls with the help of four fours and a six.

Karthik Jadhav and Mahendra Singh Doni also help to Chennai teams to achieve the winning target by their 48-run partnership. Karthik Jadhav out at 27 in the final overs. But MS Dhoni scores 32 without losing his wicket.

Delhi Opener Prithvi Shaw and Shikhar Dhawan gave a good start to Delhi for the first. Wicket. Delhi losses their first wicket at 36 in the fifth over. Shikhar Dhawan score 51 and Prithvi shaw 24.

After the Prithvi shaw’s wicket in the Deepak Chahar’s over, Delhi Captain Shreyas Iyer make the 43 runs of partnership with Shikhar Dawan. Shikhar also Shared a 41 run partnership with Rishabh Pant for the third wicket.

In this match, Rishab Pant could not repeat his last performance and was dismissed as the third batsman on the team score of 120.